Today is December 29 and I am Dennis Michael Lynch.

The House on Monday passed a measure in the $900 billion COVID-19 relief package that President Trump signed on Sunday night to give Americans making up to $75,000 direct payments of $2,000 – rather than an initial proposal of $600 – but it is unclear whether the Senate will vote to do the same.

“I agree with the [p]resident that millions of working-class families are in dire need of additional relief, which is why I support $2,000 in direct payments to Americans struggling due to the pandemic,” Rubio said in a Monday statement.

He continued: “I share many of my colleagues’ concern about the long-term effects of additional spending, but we cannot ignore the fact that millions of working-class families across the nation are still in dire need of relief. Congress should quickly pass legislation to increase direct payments to Americans to $2,000.”

Rubio will also introduce legislation to amend Section 230 of the Communications Decency Act so that it continues to protect small businesses and companies that promote free speech on the Internet but takes away “immunity” for certain Big Tech platforms that moderate certain content, according to a press release.

POLL RESULTS: We posted a poll on the DMLNewsApp Monday. Nearly 80% do NOT support the $2,000 stimulus proposal unless the wasteful spending and foreign aid is removed from the government funding bill. 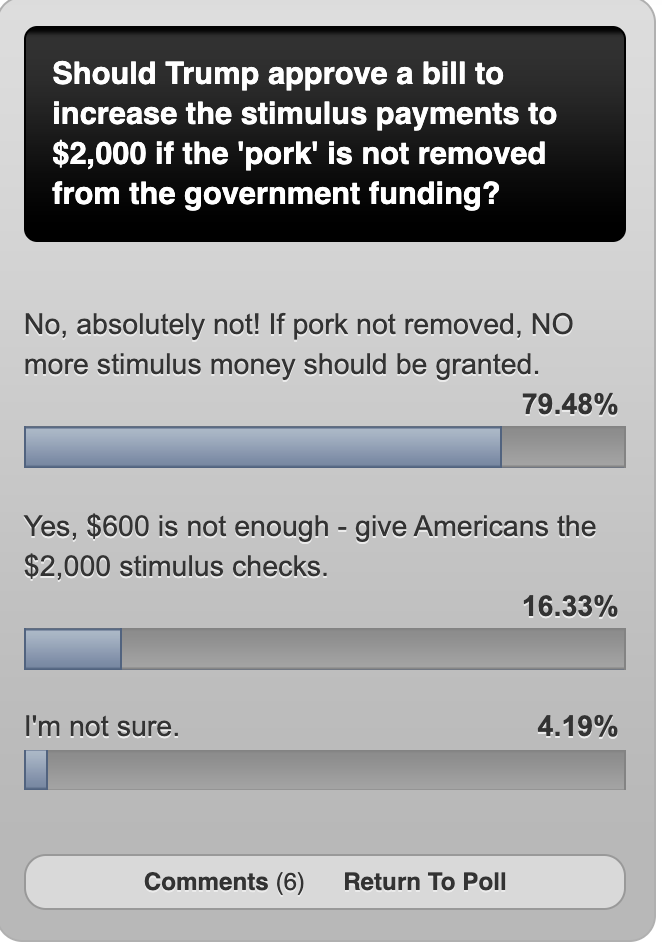 DML: Just PUT AMERICANS BACK TO WORK.  End of problem!!!!

2 – Trump opens up federal dollars for private school vouchers amid pandemic
Politico reports: President Donald Trump on Monday signed an executive order allowing states to use their share of money from a federal anti-poverty program to provide vouchers to help “disadvantaged families” pay for private school tuition, homeschooling or other educational expenses during the pandemic.

The move comes after the $900 billion coronavirus relief deal, H.R. 133 (116), that Trump signed on Sunday excluded many of the school choice provisions that his administration and GOP lawmakers had sought to include in that sweeping legislation.

The White House said that the order would give states new flexibility in how they use federal block grant programs that provide money for a wide range of community services designed to alleviate poverty and help low-income Americans. It will “provide certain disadvantaged children with emergency K-12 scholarships to access in-person learning opportunities,” the administration said.

DML: This should have been a no-brainer, instead of the $10 million for gender studies in Pakistan.

In a 3-0 decision, the 2nd U.S. Circuit Court of Appeals sided with the Roman Catholic Diocese of Brooklyn, the Orthodox Jewish group Agudath Israel of America and two synagogues in enjoining New York Governor Andrew Cuomo’s Oct. 6 attendance caps at “houses of worship.”

The governor limited attendance to the lesser of 10 people or 25% capacity in “red” zones where the coronavirus risk was highest, and 25 people or 33% capacity in slightly less risky “orange” zones, even in buildings that seat hundreds.

He also said “no public interest is served by maintaining an unconstitutional policy when constitutional alternatives are available to achieve the same goal.”

4 – Judge blocks voter purge in 2 Georgia counties
Politico reports: A federal judge in Georgia on Monday ordered two counties to reverse a decision removing more than 4,000 voters from the rolls ahead of the Jan. 5 runoff elections that will decide control of the U.S. Senate.

The judge, Leslie Abrams Gardner — the sister of former gubernatorial candidate Stacey Abrams, a prominent ally of President-elect Joe Biden who has led voter registration efforts across the state — concluded that the counties appeared to have improperly relied on unverified change-of-address data to invalidate registrations in the two counties.

The bulk of the registrations that the counties sought to rescind, more than 4,000, were in Muscogee County, which Biden won handily in November. An additional 150 were from Ben Hill County, which Trump won by a wide margin.

DML: Well, well… and the judge is none other than… Stacey Abrams sister!!

JetBlue representative Derek Dombrowski confirmed to USA Today that the performer, whose real name is Gazzy Garcia, violated the coronavirus safety precaution during a Sunday flight from Fort Lauderdale to Los Angeles.

The 20-year-old reportedly “became verbally abusive with crew members after being asked multiple times and refusing to comply with JetBlue’s face covering policy,” according to Dombrowski.

“His return reservation was canceled and he is no longer welcome to fly on JetBlue,” Dombrowski said. “The safety of all customers and crewmembers is JetBlue’s first priority.”

The report notes that in May, JetBlue became the first airline to require all passengers to wear masks. They announced: “Wearing a face covering isn’t about protecting yourself it’s about protecting those around you. This is the new flying etiquette.”

DML: “This is the new flying etiquette.” And they don’t ever plan on ending it. Just watch.